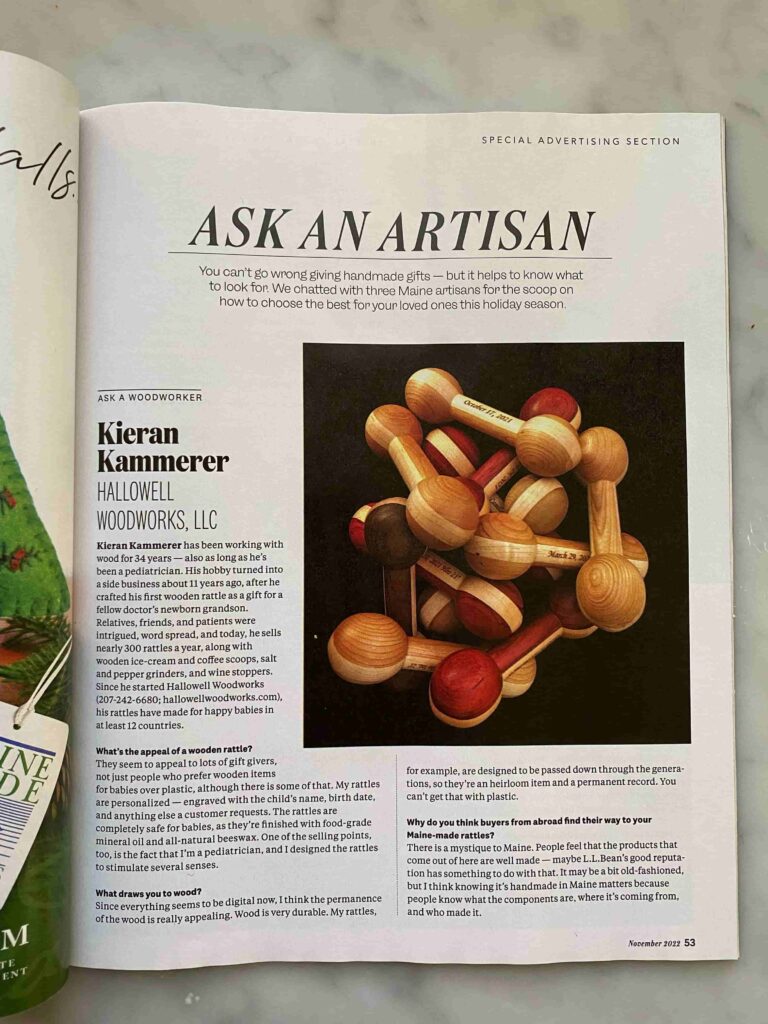 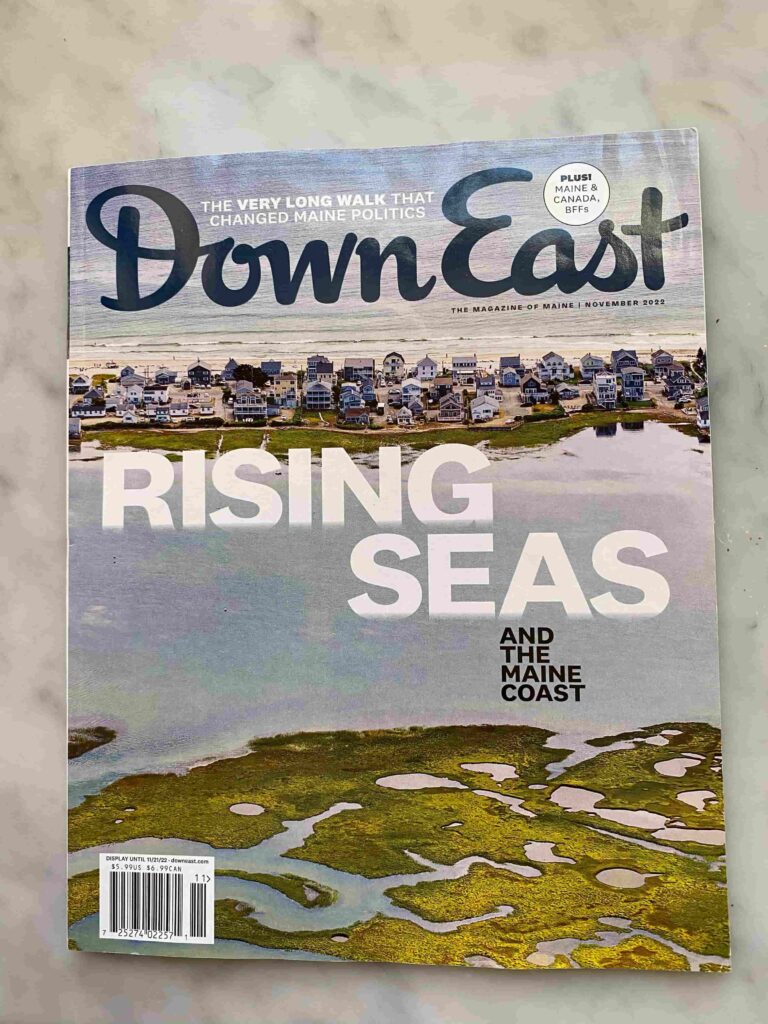 Many pediatricians post photos in their office of the children they have cared for over the years. Dr. Kieran Kammerer posts photos of children – most of whom he doesn’t know – on his website and Facebook page.

The photos come from all over the world – 12 countries, and most of the states – and have one thing in common: Each baby is holding one of the wooden “heirloom rattles” that Kammerer makes in his home woodworking shop. The infants are staring at the rattles with that funny look of baby confusion, or smiling as they shake it to hear the dried pinto beans clatter inside. Others are doing what babies do best: stuffing it into their mouths. No worries, the rattles are covered with a baby-safe finish of mineral oil and beeswax.

Kammerer, who practices medicine in Augusta, also makes furniture, bowls and wine stoppers. He estimates he’s turned out more than 1,000 rattles in the five years he’s been producing them. They are made with a combination of domestic and imported exotic hardwoods; neither of the imported woods he uses is listed in the Convention on International Trade in Endangered Species Appendices or on the Red List of Threatened Species put together by the International Union on Conservation of Nature.

You might think that Kammerer, having been a pediatrician for 23 years, has a built-in customer base, but he sees his daily work and his side business as a “conflict of interest” and is careful not to promote the rattles in his office. When parents ask about the rattles, he sends them to his Facebook page.

The rattles cost $35, but most customers spend an extra $14 to have them engraved with the baby’s name, date of birth, and/or weight and length at birth. Customers occasionally choose a unique engraving, Kammerer says, such as the time someone asked for: “We loved you before you were even born.”

Kammerer does little to no advertising. There’s no need to, he says, since many of his orders are from repeat customers and word-of-mouth.

“I like hearing the personal stories when I talk to people,” he said. “They tell me how the rattle was accepted.

“For me, it’s extra nice when I’m turning a rattle and I know the family.” 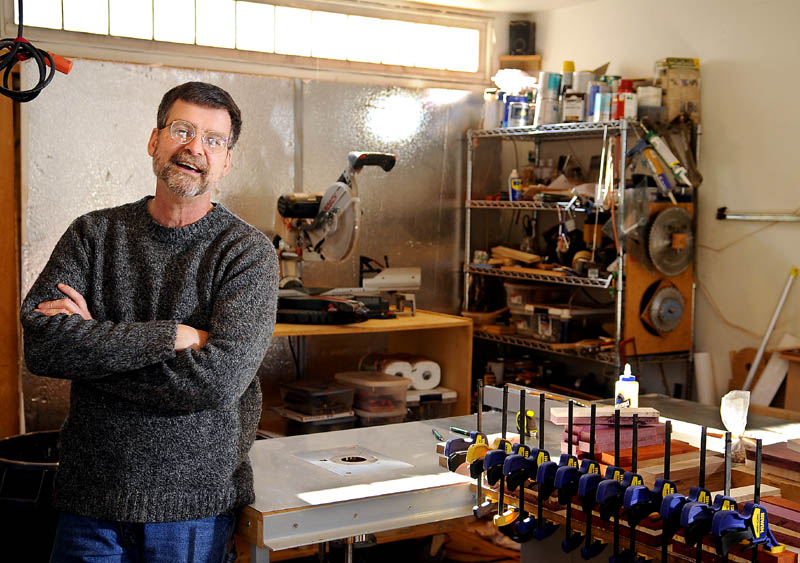 HALLOWELL — Kieran Kammerer works to foster the health and happiness of children in his professional life as a pediatrician.

He’s now found a way to do the same through his woodworking hobby.

In a little less than a year, Kammerer has created about 150 wooden baby rattles in the shop at his Hallowell home, where he also creates bowls and furniture that he sells under the Hallowell Woodworks name.

Kammerer, 53, took up woodworking more than two decades ago. He said he had long looked for a way to connect his hobby to his work as a pediatrician, now with Kennebec Pediatrics in Augusta.

“One of my partners had a grandson,” he said. “I made him a rattle, and it kind of took off from there.”

Kammerer makes the rattles from pale maple and one of three more colorful woods: Black walnut, purpleheart or padauk, which is red. 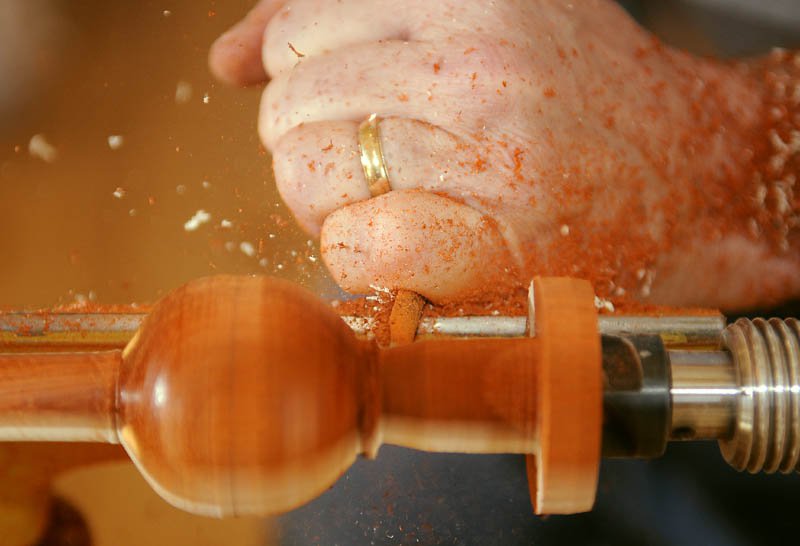 He starts by gluing together three blocks of wood, the middle of which has two holes cut into it. One or two dried pinto beans go into each of the holes before gluing.

On a recent afternoon, Kammerer had six future rattles drying in clamps. Once the glue is dry, Kammerer turns the resulting blank on a lathe, carving out a dumb-bell shape.

He said his first attempts were of a size better suited for adult hands.

“When I started making them, they looked like they were for Bam Bam,” the Flintstones TV show character, he said. “A kid could probably kill another kid with one.”

He has since scaled down his pattern. When the rattle is turned and sanded, he seals it with beeswax and mineral oil to ensure he keeps his materials as natural and nontoxic as possible.

Many rattle buyers choose to have a child’s name, date of birth, birth weight and city of birth engraved on the delicate bar connecting the two ends of the rattle. Hannah Manufacturing in Augusta does the laser engraving.

Belgrade resident Stephanie Koetzle’s son, Sam, received one of the rattles when he was born in August. He started to grasp the rattle at about 3 months old and really enjoys playing with it, Koetzle said.

“He can grab onto it and shake it, and he knows that the noise is him making it, so it’s really cute to watch him develop,” she said. “It’s a nice toy when he’s on the floor. He can throw it down, pick it back up easily. It’s easy to throw in the diaper bag.”

Sam’s rattle was a gift from Hallowell resident Maria Fuentes, who has also bought them for two other friends’ babies. She plans to buy one for her 10-year-old son, not to play with, but just to have.

Kammerer markets the rattles as heirlooms and said the hardwoods he uses should hold up well enough to be passed down through families.

Kammerer said he enjoys hearing the stories of the families where the rattles are headed. He’s also learned more about traditions in other countries, such as naming traditions in Iceland, where he shipped a pair of rattles for twins.

Through word-of-mouth and Facebook, Kammerer has made rattles for children in about 20 states, as well as countries including Belgium, Germany and Haiti. “My goal is to get one in every state,” he said.